Some thoughts on the current streaming market

I gave an interview to the Norwegian Afternoon Post last week. For those Norwegian speakers amongst you, you can find the original here. 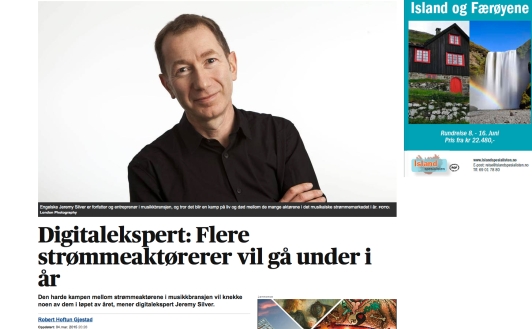 In case your Norwegian is a bit rusty, here’s a rough translation:

The hard struggle between streaming players in the music industry will crack some of them during the year, says digital expert Jeremy Silver.

The reason is Apple’s anticipated entry into this growing market.

When the conference part of the Nordic music industry festival Bylarm opens today, about half of the program is about streaming of the music. Not without reason, for streaming is emerging as the industry’s major source of income and amounts to as much as 75 percent of revenues in Norway now.

– There are at least 15 providers now battling for the streaming market, globally and especially in the US. In addition one has at least five players who only bet on the Asian market, in India and China. With Apple and their Beats Music on the way in, it goes without saying that this will be a fight to the death, said Jeremy Silver.

He recently released book Digital Medieval – The first twenty years of music on the web … and the next twenty, and knows all aspects of today streaming market.

– All major players going in there now, with products that are almost exactly alike, and the idea that everyone will win is unthinkable. We’re going to see a bloodbath among the many players in the course of the year, said Jeremy Silver.

Friday afternoon the English industry and digital expert comes to By: Larm in Oslo to talk about music, consumers and the many challenges of the internet.

Silver’s belief that these will be difficult times is supported by editorial director Sveinung Rindal from Norwegian services Wimp / Tidal. Tuesday saw the international version of Norwegian Wimp, which is also called Tidal, launched in Norway.

Tidal is one of the many players now vying for streaming customers globally and in the US market.

– What he describes is how the same story has continued, an ongoing bloodbath since 2010. To establish themselves in this market costs a lot, and there is so far no streaming services in profit after a year of operation. Given that Apple with its Beats manages to position itself as a real competitor to Spotify, so it can become a real bloodbath, yes, says Sveinung Rindal.

Tidal was first launched in the US and UK in October last year and aims for better sound quality (so-called lossless, like CD audio) and more editorial content than for example the Swedish big brother Spotify.

Expert Jeremy Silver agrees, Tidal is onto something right with its focus on sound quality and editorial beyond the music itself.

– The idea is ingenious, good for public relations. Now it is both Tidal and Neil Young’s “Pono” who are placing their bets there, and for me it is interesting. In a mass market the sound quality will never be important to many people, but there are some users who want it, and therefore there may be room for a player like Tidal, said Jeremy Silver.

He believes that the music industry is only just starting to exploit opportunities that exist on the Internet, hence the book title “Digital Medieval.”

– To get ahead, to the digital renaissance,  the music industry must exploit the whole culture all around. Music is about much more than a streamable or downloadable file, it’s about lyrics to songs, albums, concerts, licensing, pictures, videos, liner notes and more. Spotify and other streaming services just do not give me enough of the music context that I want. This is what we need more of, said Jeremy Silver.

He will not speculate on what Apple plans for its service Beats Music, which they bought from various folk including hiphop artist and producer Dr. Dre a year ago.

This entry was posted in Media. Bookmark the permalink.

One response to “Some thoughts on the current streaming market”